The goals of the System

Structure and functions of the Coal Quality Management System 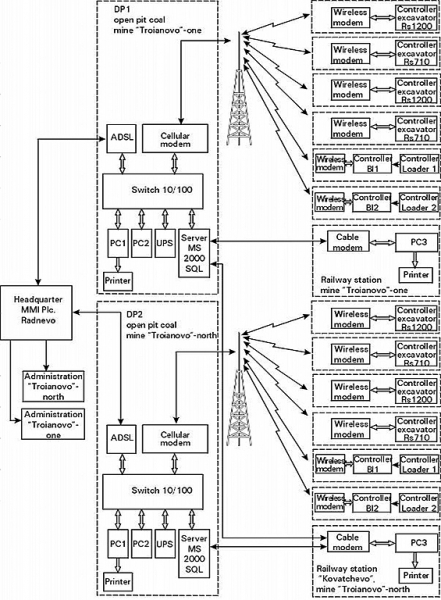 Permanent on-line measurement of the coal ash content and quantity

The first and basic level of the SQMS is the on-line measurement of the coal quantity and quality at 17 points in the three open pits of Maritza East Mines. These points are all 12 coal excavators (4 in each pit), and the ends of the 5 conveyor transport lines carrying the coal out to the three TPP working in that region. The ash and load measurements are done by BCA analyzers at every second. 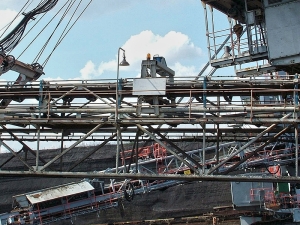 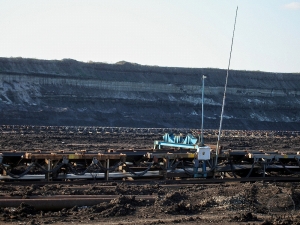 Transmitting data from the measurement points to the servers

Next level is the on-line transmitting of the measured data to the servers in the dispatcher posts (DP) of the three pits. 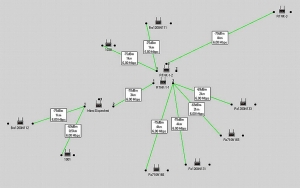 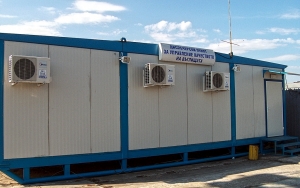 Radio connections in one of the pits       Open Pit Dispatcher Post

All analyzers and the 3 servers are connected in a radio net which includes their own radio modems as well as some intermediate modems ensuring connections between the basic points in the hard for radio connection mine conditions.

Processing and storing information and using it by Pit Chief Dispatcher

All the information concerning coal excavation and transportation and the status of all excavators and conveyor belts for each of the three pits is processed and stored in the respective servers (third level of the System). These servers are installed in the Dispatcher posts of the three pits where trough their working stations the Pit Chief Dispatchers control all the excavation and transportation process and the coal quantity and quality. Besides the measurement data these servers store full data base for coal deposits including the general geological maps and all current data from geological samples. Special software helps the pit chief dispatcher to make the shift tasks for each excavator and generally for the pit. By means of the System during the shift he controls the realization of these tasks and could develop or change them.

At his display dispatcher can see all the time, or when necessary at several screens the next information and to set working parameters for each excavator: 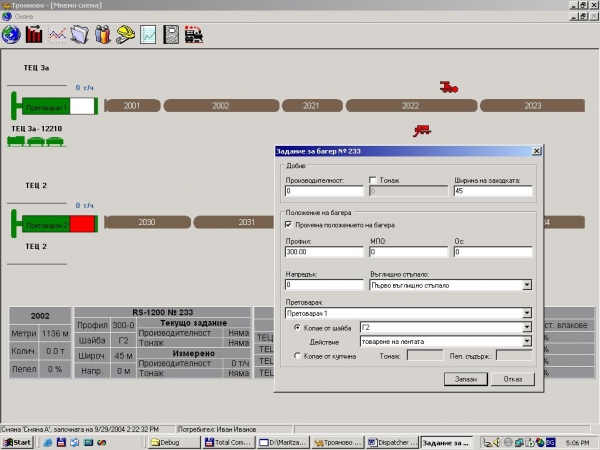 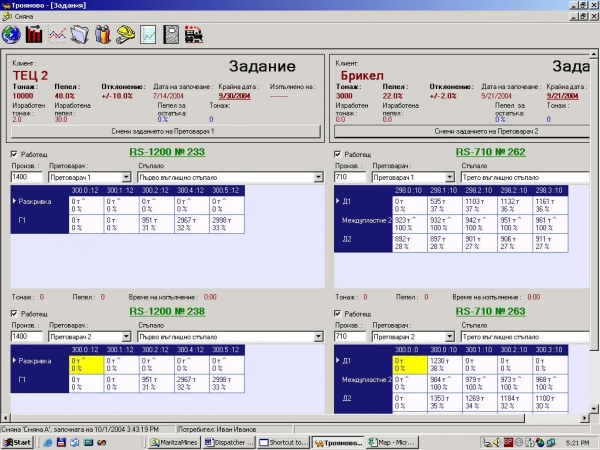 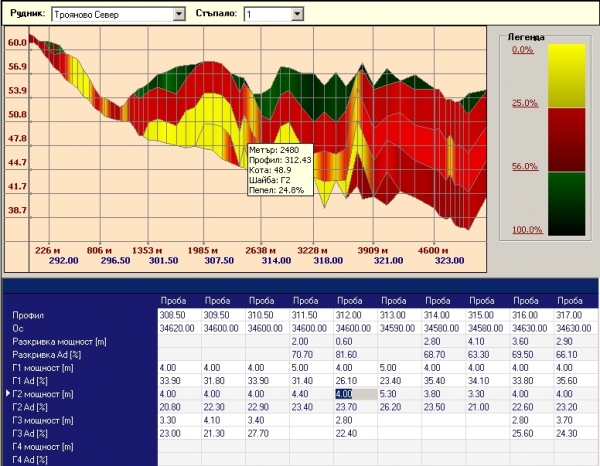 Delivery of information to the Mines Management

The highest level of the CQMS is the information delivery to the head office of Maritza East Mines. All kinds of reports could be taken of these servers trough the Corporative Net. Depending on the level of access every specialist and manager can receive real time information concerning excavation process and coal deliveries to the TPP and reports for any period of time and by any criteria. So the System helps to the leading managers to make the best decisions for the current and for the general mines exploiting.

The on-line management of quality significantly improved the meeting customer’s requirements. For example the biggest Bulgarian TPP “Maritza East-2” receiving coal from Maritza East Mines requires the mean coal ash content to be in 2% wide diapason and not more than 5% difference for a single shift. Before introducing CQMS the difference between the annual mean values of the ash content analyzed by coal lab in TPP “Maritza East-2” and given by Maritza East Mines certificates is 2.6%. This difference decreased to 1.2% after putting CQMS in operation. In same time the number of penalty situations because of exceeding 5% difference decreased from 90 to 10 annually.

On-site blending of coal during the excavation trough the CQMS allows the usage of high-ash coal, which is up to 15% in some parts of Maritza East Mines. It brings additional annual income of millions euro to the Mines.

Optimization of the mining processes

The System provides reliable data for current state of mining excavators and transportation machinery which allows the staff in charge to have a full view over all the processes and a fast reaction when necessary. CQMS has become an indispensable device for the mining process management.

Benefits given by improving the control of  processes, machinery and staff is difficult to be calculated. But they are easy visible - at the computer screens, during the production conferences, and in almost every information transfer - data, obtained by CQMS are in permanent use.

The general estimation of the CQMS using in last years shows decrease of production costs for 1t of coal of 2-3%.

History of building the System

In the beginning the on-line coal quality and quantity measurement was introduced only at the end of the all five belt conveyor transport systems in the three open pits of Maritza East Mines. In two of these pits coal is carried by trains to the TPP stations and in the third one the belt conveyor transports the coal directly to the TPP. The ash analyzers installed at these 5 points measure the belt load and the coal ash content, so we have on-line information about the coal quantity and quality in the loaded trains as well as at the belt loading coal in the TPP store.

Dispatcher has on-line information about the quality of outgoing coal so he can control it trough changing the output of each excavator to meet the desired value of the common coal quality. But if he had information for the ash content only at the end points of the 3-4 km long conveyor systems, than in case of big quality deviation and respective dispatcher decision to change the load of some excavators, the result would come with too big delay because there is a lot of coal already loaded on the conveyors.

It was the reason for us to design and built ash analyzers working directly at the Bucket Wheel and Chain Excavators. Nobody could do it before in any coal pit because of the serious fear that the extremely hard conditions as well as the large coal size right after excavating will obstruct the necessary accuracy and reliability. But we took the challenge and the practice of last 6 years showed that we successfully solved that seemed insoluble task. In 2006-2007 we successfully install on-belt ash-analyzers at all 12 coal excavators in Maritza East Mines.

Studding all the exploitation problems in next 2 years allow us to designing a next generation on-belt ash analyzers (BCA-06). Last two years all 17 on-belt ash-analyzers, the radio communication system, the servers and the software were renewed.

Our last project for Coal Quality Management System was realized in the newest Bulgarian TPP – AES Maritza East 1. In this system as in the system produced by Analix 5 years ago for ENEL Maritza East 3 (now property of Contour Global), we integrated together with our ash analyzer under a common control and data processing, the Callidan Instruments Moistscan® on-belt microwave moister meters. 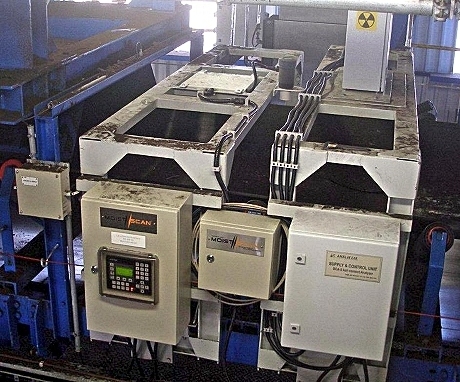 The on-belt analyzers, which measure coal ash content and moisture, are mounted on conveyor belts next to Coarse crusher and next to Fine crusher (one analyzer unit per conveyor belt). Each on-belt analyzer communicates with computer station for data processing. The computer stations transfer processed information to interface operator stations – one for the analyzers next to Coarse crusher and one for those next Fine crusher. Software application ‘Calorimeter’ ver. 2.0, installed on the interface operator stations (terminals), ensures measurements data visualization and reports creation.

Presented system provides continues measurement of coal ash content and moisture, also of belt load and total coal quantity. By the software the coal caloricity is calculated on-line as current and as average value. Appropriate user interface presents all the information provided by the system and it is also sent to the power plant information system in the required data format.

The belt ash-content and moisture analyzers (radioisotope ash-content analyzer BCА-5 and the microwave moisture analyzer Moistscan) operate fully automatically and operator service is not required, except in case of failure or damage. They are designed and built in such way that they do not require adjustments and service during normal operation. The current maintenance includes only periodical status check and empty belt normalization.

In general the benefit of using BCA is reducing of the production costs.

The pay back period for BCA instruments is about one year of operation.